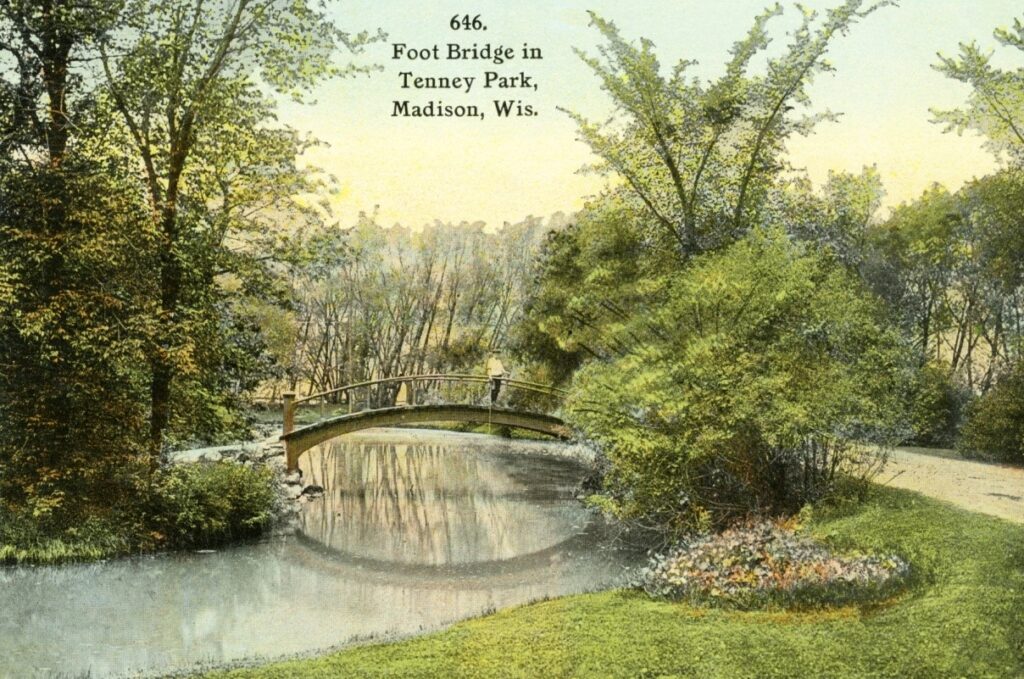 The foot bridge connecting the Tenney Park Island with Thornton Ave was built in 1904 with $418 donated by D.K. Tenney. This postcard was postmarked 1911. Published by E.A. Bishop, Pub, Racine, Wis. 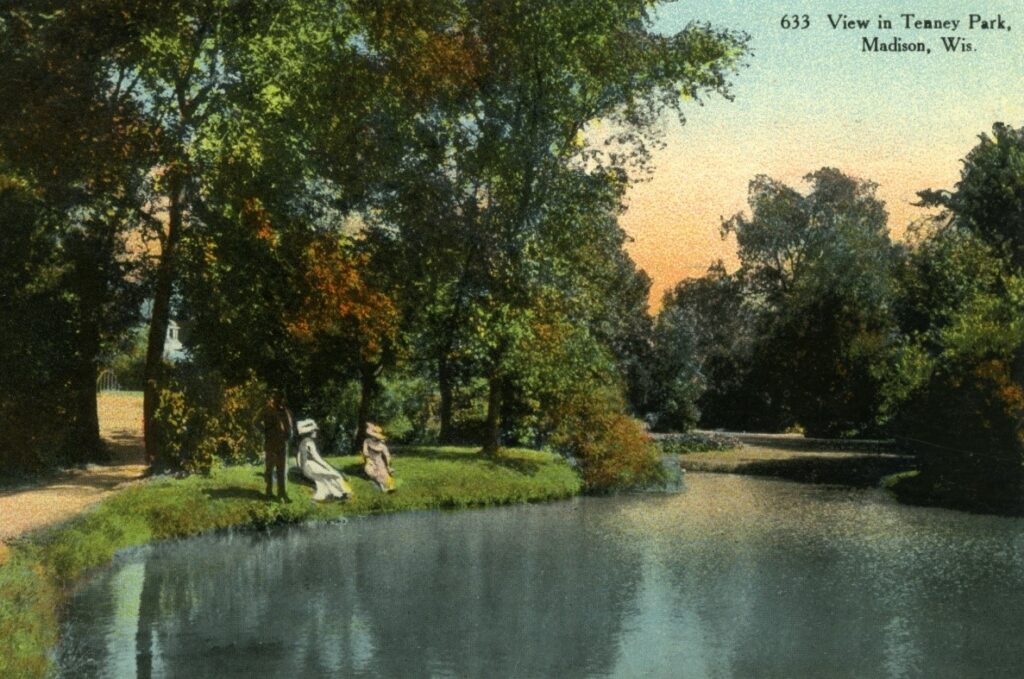 Two women and one man are enjoying an afternoon by the banks of the Tenney Park Lagoon. There is no postmark date. Published by E.A. Bishop, Racine, Wis. 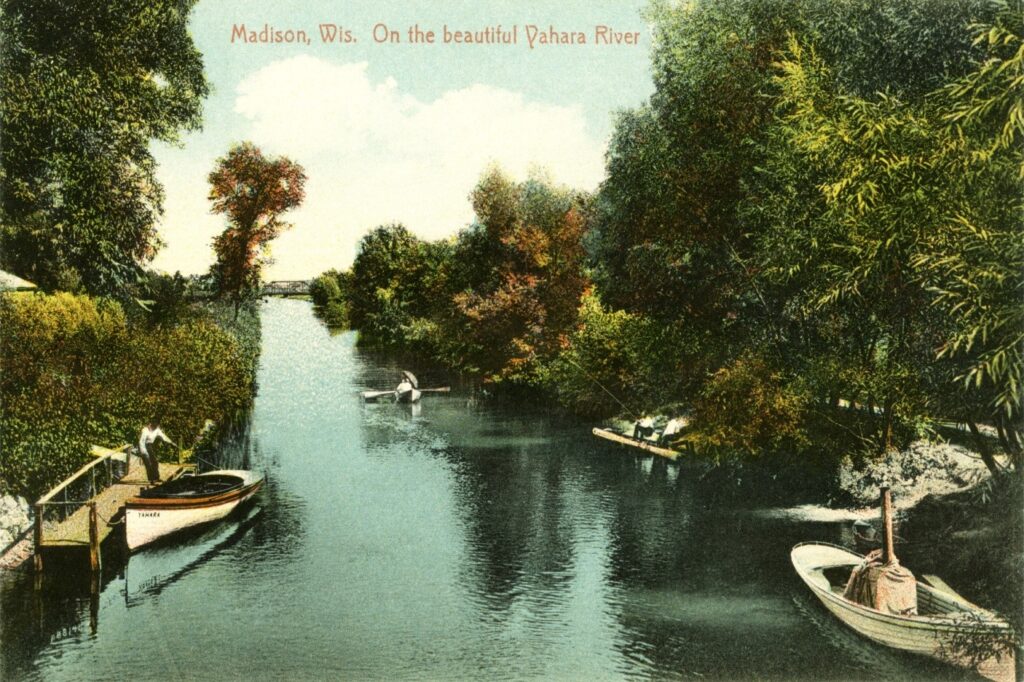 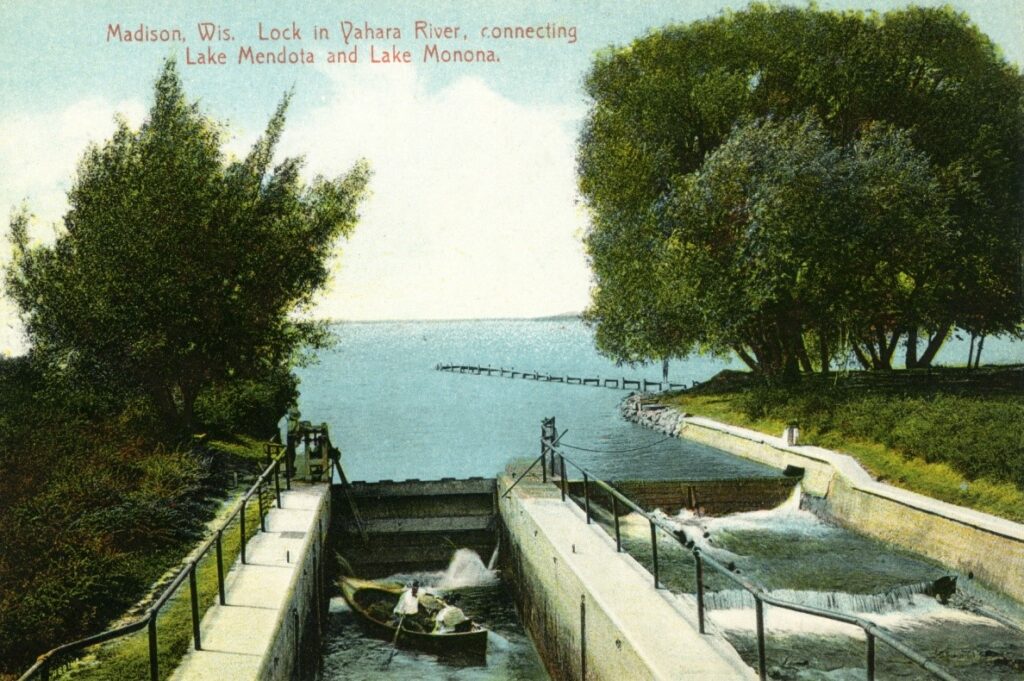 The Yahara River lock and dam built in 1906 and replaced with more modern locks in 1959 and then updated in 2006. No postmark date. Publisher: The Hugh C Leighton Co Manufacturer, Portland Me. 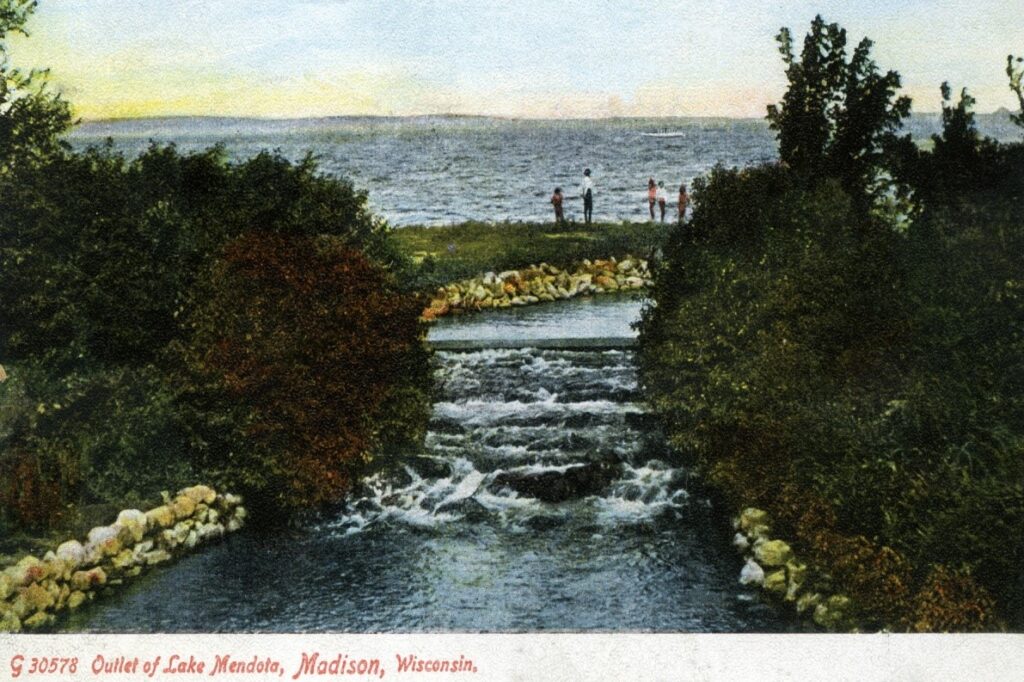 A spillway carried water from Lake Mendota into the Catfish (Yahara) River. It was probably used prior to 1903. This postcard was postmarked 1907. Publisher: The Rotograph Co, NY City.

The Century Celebration of the Tenney Lapham neighborhood originally scheduled for September 9, 2018 was postponed due to extensive flooding of Tenney Park.  The Celebration finally happed on May 19, 2019.  Hundred of Tenney Lapham residents and friends from other neighborhoods gathered in the Tenney Park shelter to see history displays, participate in a canoe/kayak race, hear history storytellers and, of course,  eat cake. At the end of the celebration, participants walked to the newly installed Vintage Postcard Installation near the playground. After welcoming speeches, the five permanent postcard sculptures were unveiled.

On September 9, 2018, from 1:00 PM to 5:00 PM, we will celebrate 100 years of Tenney Park and the Tenney-Lapham Neighborhood. The outdoor celebration — a family-friendly, old fashioned gathering — will take place on the Tenney Park Island near the basketball courts. (In case of rain, the party will be in the pavilion)

• Enjoy cake and ice cream (1:15)
• Savor the history of Tenney Park and the Tenney Lapham Neighborhood. Meet Mr. Tenney, Mr. Olin, Mr. Nolen and Mr. Simonds. Meet the women of the suffrage movement.
• Listen as storytellers tell history tales of Tenney Park and the Tenney-Lapham Neighborhood. (1:30-2:30)(3:30-4:30)
• Hear early 1900’s period music featuring Bill and Bobbie Malone and Tenney-Lapham’s very own Kristy Larson. These three exemplary musicians are known to many of us due to their rich contributions to the country and honky tonk scene locally and nationally (2:30-3:30).
• Audio record your story at the table of the Madison Public Library’s Living History Project
• Witness the unveiling of a new art installation of Vintage Postcards of Tenney Park. (4:30PM)
• Children’s activities throughout the afternoon

Walk, bike or bus to the Park. Overflow parking is available at Care Wisconsin, 1617 Sherman Ave. Bring a blanket and spend the afternoon. Come in costume if that suits you. Fun for all ages.

The Century Celebration honors our vibrant historic neighborhood and Tenney Park and is funded, in part, by the City of Madison Neighborhood Grant Program, the Tenney-Lapham Neighborhood Association and local residents and businesses.

Many enjoyed themselves at the installation